Obituary to Life on Earth 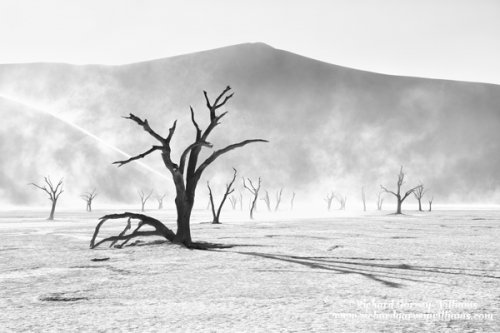 Prepare to weep as you read this this short piece I've composed to reflect the result of us failing to fully address our impact on both the climate and the environment... I’m sure I’m not the only person to have noticed that in many competitions there appear to be a disproportionate number of images of kingfishers emerging from water with fish in their bills, mountain lions leaping across narrow canyons, red squirrels in mid-air, hummingbirds hovering to feed from a beautiful flower and the like. If you look through the advertisements for photography workshops in many a magazine, you’ll come to the conclusion that many of these must have been achieved through attending one of these. The perceptual processes that go on within us when we view a photograph are indeed fascinating and neuro-physiology is revealing some interesting insights into these processes. This is enabling us to define what triggers them and to determine when they occur and how quickly; which parts of the brain are involved; how they relate and connect to other processes in the body and brain; how we build our perception and interpretation up in a complex way using inputs from various visual and perceptive processes. From all this we can go on to theorize as to why they might have evolved and what purpose they serve. This November I had the privilege of spending the whole of November in Namibia leading two photographic safaris back-to-back. A tiny bit of rain on the first and last days, but otherwise pretty much full-on sunshine! Temperatures were a little taxing for the first group particularly on the long journey on the first day when we headed to the edge of the Namib desert where temperatures were reaching 40 degrees. Arriving there the six of us soon acclimatized and immersed ourselves in the rugged, colourful landscapes of the Namib Rand reserve. Is it just my perception, or are we really being swamped by images that appear to have been taken on another planet? Particularly in Salon and other competitions there appears to be a plethora of rather unnatural, other-worldly photographs. I do enjoy seeing an element of this work and particularly when it is within the ‘creative’ categories. However, it seems to have spilled over into ‘open’ and even ‘nature’ categories and is threatening a complete take-over. Maybe it’s just my age, but I do like to see some photographs from time to time that at least look as if they have been taken on this beautiful earth on which we dwell. A few thoughts... I regard myself as an environmentalist and much of my drive as a photographer comes from my desire to convey the beauty around us that we stand to lose if we don’t make radical changes in terms of our mindsets and actions. So, of course, I also challenge myself with regards to my own role in the devastation of this planet. It’s sad that it takes the shocking circumstances around the death of a creature as majestic and well-known as Cecil the lion to bring both the plight of much of our planet’s wildlife and a dark side of human nature into the limelight. Mainstream media coverage exposes the gory details and through social media platforms we are all rightly expressing our outrage. At least now we all hopefully know that there are only 20,000 lions left in the wild in Africa – the population of a small town/large village here in the UK spread over the whole of a very large continent - and that these numbers are falling rapidly. This series of ‘vintage wildlife portraits’ started out as a comment on trophy collecting. They’d all be tightly-cropped ‘clean shots’ of the animals with the subject looking straight ahead. The sepia fine art treatment of these photographs was used to partly give a sense of the aging of these trophies decorating the halls of the mansions of the wealthy, ‘elite’ hunter-set, but also to reflect the potential extinction of these species... and how all we’ll be left with of them is stuffed museum pieces and fading photographs. Click here to read this interview that appeared August 2015 in ePhotozine, the popular on-line community for photographers. It followed on from my winning the wildlife category for professional photographers in the Fine Art Photography Awards. It includes discussion about how I came to be a photographer and how I hope my photography might help with conservation. This 10-day safari included visits to four reserves. We started in Tsavo West and Amboseli and then headed north to Samburu breaking the journey in Ol Pejeta conservation area. Read on for an account of this amazing experience... Here is the full text of this interview about Mastering Wildlife Photography Book shortly after its release: Those familiar with my work will know that I present quite a lot of my imagery in black and white. If you’ve not experimented with converting your images to monochrome, it can be a fascinating process and raises a lot of questions to ponder about the role of colour and tones in your photographs.

Interview with Outdoor Photography Magazine (May 2014) Richard was interviewed by Outdoor Photography magazine about the process of writing the book ‘Mastering Composition’. The full text can be read here together with links to another interview and review on this book:

When a Photograph Tells a Lie Human beings are ‘relational’ creatures, always on the look-out for an individual connection with others. We only have to see how most of us treat our beloved pets to see that we also readily extend this search for perceived relationship to other species. As I discussed in ‘Mastering Wildlife Photography’, this leads us to a tendency to anthropomorphism (the attribution of human form or behavior to an animal). Purists in the scientific community will often caution naturalists against anthropomorphism and indeed most animals do speak a very different language to us both in terms of their utterances and body language.

A week with the grizzlies Research for locations offering opportunities for close encounters with bears resulted in me making a trip to Alaska’s Lake Clark National Park in June 2014. At its very southernmost tip the park meets the sea and here at this time of year Grizzly Bears come out into the open, many with cubs in tow. The reason is their quest for the protein necessary to see them through the coming winter months. Read on for an account of this trip...

Interview with Namibia Tourism Board In September 2014 the Namibia Tourism Board interviewed me about my photographic safari experience in this wonderful country. I had spent nearly 3 weeks there in November 2012 travelling alone and concentrating on my photography.